Yani is the janitor of Dexter's school.

Trapped with a Vengance

Due to Dee Dee being a constant nuisance to Dexter at home, Dexter prefers to do his experiments at school where it's quiet. However, he often overstays his welcome and leaves school at a very late hour, along with leaving an immense mess which Yani must clean up.

This causes Yani much misfortune, as working until late night causes him to arrive home at a late hour, which in turn causes him to accidentally wake his wife and she proceeds to unleash her fury on him. Having grown tired of Dexter's constant unintentional torment, he decides to trap Dexter in the school so he won't make it home on time to save his laboratory from a laser wielding Dee Dee. Despite Yani's best attempts to sabotage Dexter's escape, he discovers his efforts have done little more than created an even bigger mess than Dexter's previous efforts, sending the Janitor into a rage. As Dexter and Yani come to blows, the latter's wife storms the school, discovering their brawl and arriving at the conclusion Yani's late nights had been little more than goofing off with friends. Unable to clear his wife's delusions, Yani is forcefully sent home, with Dexter free to return home. 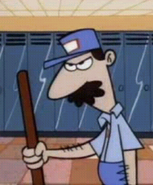