Ultrajerk 2000 is the third part of the 15th episode in season 2 of Dexter's Laboratory. It originally aired on October 22, 1997. In this episode, Dexter designs a new robot called Ultramark 2000 to help him with his laboratory. Unfortunately, it ends up controlling his lab, so Dexter must find a way to destroy it. 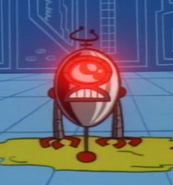