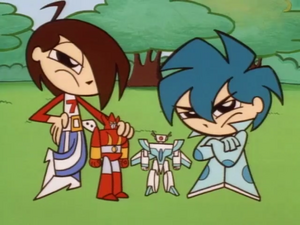 The Two Boys From Japan are as the name implies, a duo of young boys who live in Japan. They made their first appearance in "Last But Not Beast." When Dexter came to Japan at the Japanese Elementary School, he saw them playing with their model robots. Dexter showed them the "Exo Jock 4000." The boys were not so impressed and they showed Dexter their robotic models (one red round vehicle on wheels with drills that can open up and the other a blue robot similar to the Exo Jock 4000 but blue and tougher.

Dexter then showed off the giant Dexo Robo. After his performance, the boys showed off their robots which were bigger, stronger and more powerful. Dexter then tried to show off his missiles, but is interrupted by the Japanese teacher (who also has a giant robot except for light purple and feminine like her). Dexter's missiles accidentally fly off and unleash Badaxtra. The boys, along with the teacher, fly off so they wouldn't get attacked by Badaxtra, leaving Dexter to deal with Badaxtra.

Retrieved from "https://dexterslab.fandom.com/wiki/The_Two_Boys_From_Japan?oldid=35229"
Community content is available under CC-BY-SA unless otherwise noted.