The Infraggable Krunk (or simply Krunk) is a member of The Justice Friends. He is the biggest and strongest Justice Friend, but he is also the dumbest and kindest. He is voiced by Frank Welker.

Krunk is a large and overly muscular purple humanoid with short messy purple hair and a usually hunched posture. He wears almost no clothing at all except for his green trousers with are a bit torn. Occasionally he has worn a few costumes and he owns a "Puppets Pals" t-shirt and cap.

Although he is around the same age as his friends he has the mind and mannerisms of a child and mainly speaks in third person. His favorite T.V show is "T.V. Puppet Pals" and he has a toy named Teddy. He has a crush on She-Thing, which she reciprocates. In earlier episodes, he refers to Major Glory as "Flag man", Valhallen as "Blondie" and Living Bullet as "Shiny Man". He lives with Major Glory and Valhallen in the apex floor of the Muscular Arms apartment building and despite their differences and quarrels, they are in fact good friends.

Krunk is a powerful superhero and likely the physically strongest hero on the planet who has even earned the title of "World's Mightiest Mortal", showing that he truly is the mightiest man among mortalkind. Because of this, he is one of the strongest heroes in the series alongside Monkey, Valhallen and Major Glory. Krunk's strength seemingly grows whenever he becomes emotional, such as being too happy, excited or angry. His strength is so great that he can even lift the titanic Badaxtra and toss him far enough into the sky until he is out of sight. He also possesses superhuman invulnerability, regeneration, and is completely immune to pain, as even getting assaulted by an entire legion of villains did no harm to him. The only things that can actually harm him are tooth aches and White Tiger's claws (although getting sliced to ribbons doesn't seem to hurt him). However his low intellect, emotional behavior, and childish personality are his greatest weaknesses as he can easily be distracted or fooled. However when She-Thing gets her nails broken during Glory's fight with Comrade Red, Krunk goes ballistic and becomes stronger through rage and proceeds to beat him up and another member from Comrade Red's gang. The fact that he was one of the few heroes summoned by Rasslor to represent his planet further proves that he is one of the most powerful heroes on Earth.

Krunk as an executive 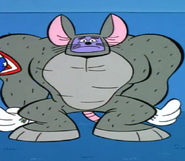 Krunk disguised as a mouse 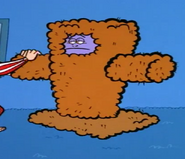