The Ghost of Dexter's First Love is a figment of Dexter's imagination created after he shrunk himself which caused him to lose his perception of reality. In actuality she is just a clown puppet. She appeared in the episode, "Doll House Drama".

In actuality the Ghost of Dexter's First Love is a clown hand puppet, however to a delusional Dexter, she appears as a ghostly woman with long flowing hair, wearing a white flowing dress, a necklace and earrings.

When Dexter shrank himself down to doll size using his Shrink Ray, it caused his imagination to run wild. She appeared to a delusional Dexter as the ghost of Dexter's first love, telling him to forgive his wife Darbie for being unfaithful to him. In actuality it is just a clown hand puppet being controlled by Dee Dee. 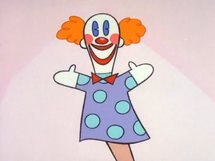 Retrieved from "https://dexterslab.fandom.com/wiki/The_Ghost_of_Dexter%27s_First_Love?oldid=31177"
Community content is available under CC-BY-SA unless otherwise noted.