Dexter's Laboratory Wiki
Register
Don't have an account?
Sign In
Advertisement
in: Episodes, Season 1, Episodes focusing on Dexter,
and 4 more

The Big Cheese is the third part of the ninth episode in season one of Dexter's Laboratory, which aired on December 4, 1996. In this episode, Dexter is in his lab working on an experiment and neglects studying for his French test. To mitigate this, he uses an invention that allows him to learn French as he sleeps.

The record, however, repeats the phrase "omelette du fromage" over and over, making it the only thing Dexter can say. Due to this, Dexter briefly becomes a celebrity.

During the evening, Dexter goes into his lab to work on breaking the DNA code. Before bedtime, Computer reminds Dexter that he hadn't studied for his French test. To mitigate this, Dexter orders Computer to bring him the Subconscious Discographic Hypnotator, which he attaches to his head the moment he leaves the lab. Lastly, Dexter finds an old French record and places it inside the player. He then goes to sleep listening to the French lessons, but the record skips "Omelette du fromage" repeatedly.

The next morning, Dexter goes to the kitchen to eat breakfast and is greeted with Dee Dee taunting him. When Dexter shouts "Omelette du fromage" at her, Dee Dee takes note that is the only thing he says and starts teasing him for it. Later at school, Dexter is in his French class taking his exam. Before it begins, his French teacher explains to the class that the curriculum has been reduced to a single question. Dexter answers it and passes the exam. Later in math class, Dexter answers "Omelette du fromage" to his teacher's question. His teacher realizes the answer and writes it down, leaving Dexter confused.

Later on the playground, Dee Dee walks by Dexter teasing him. Dexter shouts at her and unknowingly attracts two girls. When he says "Omelette du fromage," several girls gather around him in awe. However, three bullies walk toward Dexter and he pleads for them to go easy on him. The bullies misunderstood his intentions, leaving Dexter smiling.

Overtime, Dexter's only phrase makes him a brief celebrity. His moment of happiness is cut short when Dexter is unable to enter the lab. Dee Dee appears once more to taunt him for only saying "Omelette du fromage." 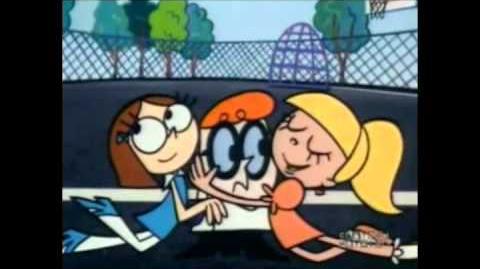