Sister's Got a Brand New Bag is the first part of the 6th episode of season 2, which first aired on August 20, 1997. In this episode, Dee Dee shows Dexter a dance that she saw on Groove Train.

Dee Dee is watching Groove Train and is bored by the many dancers on screen, but her interest picks up as she sees Big Daddy Fat on the screen. Dee Dee then starts to mimic his dance moves while feeling unsure. She memorizes the dance moves and starts doing it in the same manner as Big Daddy Fat. Happily, Dee Dee runs to show Dexter.

In the lab, Dexter is working on his invention and is interrupted by Dee Dee. He boots her out of the lab, and Dee Dee suddenly reappears behind him doing the dance. Annoyed, Dexter flees to another part of his lab to hide from Dee Dee. As Dexter activates one of his inventions, Dee Dee appears in front of him doing her dance. He goes to get his freeze tank in the hopes to stop Dee Dee from dancing.

Dee Dee dodges the shots, causing the lab to turn into an ice rink. With Dee Dee nowhere to be seen, Dexter runs to his submarine and hides underwater, only for his sister to appear in the same place. Dexter flees from below sea level and runs to his space pod. As Dexter floats in space, Dee Dee again appears in front of her little brother doing her dance. Annoyed, Dexter returns to his lab and finds Dee Dee on several computer monitors doing her dance. He caves in and watches Dee Dee do her dance.

The dance leaves Dexter impressed, and the siblings go back to what they were doing. 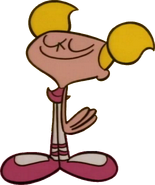 Dee Dee, as she appears in this episode.
Add a photo to this gallery

Retrieved from "https://dexterslab.fandom.com/wiki/Sister%27s_Got_a_Brand_New_Bag?oldid=38513"
Community content is available under CC-BY-SA unless otherwise noted.