Rude Removal is an episode of Dexter's Laboratory that originally intended to be part an episode for season 2. Instead, Rude Removal was quickly banned and rejected from airing on Cartoon Network due to the characters swearing even though the profane words themselves were censored.

The episode only aired at some animation festivals before Adult Swim got a copy of the episode and uploaded it to the internet on January 22, 2013 before it was taken down on January 25, 2013.

In this episode, Dexter invents a "rude removal" machine that separates his and Dee Dee's rude behavior from their good behavior. However, chaos ensues when their rude clones head out of the lab and tear up the house, leaving an angry Mom in their wake.

Dexter is putting the finishing touches on another one of his latest inventions. However, Dee Dee enters the lab and sees two tanks filled with gas and mischievously makes the gas explode in Dexter's hair. Dee Dee then asks what he's making, and Dexter explains that it's called the Rude Removal system, and that he is going to use the machine to remove her rudeness and make her be more polite. Dee Dee denies that she is rude and retaliates, saying that Dexter is the one who is rude. They then argue about who's rude and who's not, and Dee Dee sarcastically replies that she is the rude one and kicks Dexter in the butt, causing Dexter to turn on the system. Dexter finally is able to tackle her, but unfortunately this makes them both roll into the rude removal system, causing both of them to have their rudeness removed. After this happens, the two have British accents and act more polite than before. This also however, creates two vicious, foul-mouthed, rude duplicates of them both that sound like old-timey robbers in the other end of the machine. The rude duplicates start swearing and beating up Dexter and Dee Dee and they run off swearing and destroying the lab.

Mom calls the two down for lunch, so the rude copies of Dexter and Dee Dee smash their way downstairs, breaking things and cursing. Just as they reach the dining room, they stop swearing and sit down at the table, and they then shove food in their mouths while making rude noises. When Mom asks them how they're enjoying the meal, rude Dexter answers with a profane sentence, to which rude Dee Dee counters with more swearing, causing Mom to faint. When she awakens, she is caught between a food fight between the rude clones, further angering her and causing her to yell at the two to go to their rooms "forever". In response to the request, Rude Dexter starts to back-talk Mom by telling her "to do what all good mothers do and clean up the mess yourself", then leaves the kitchen with Rude Dee-Dee. Rude Dexter spots Nice Dexter and Dee-Dee and tells their nice counterparts that their mother wanted them. They accept the matter and ask their rude clones where they were going, to which Rude Dexter replies, "Yeah, we're gonna go f*** up your lab!" Nice Dexter and Dee-Dee do not take the threat too seriously and go on to the kitchen where Mom equips Nice Dee-Dee with a mop and demands they clean up the mess the rude counterparts made while she goes out to get a bar of soap to "clean out" their mouths. When the nice counterparts are about to clean, they hear the rude clones destroying the lab, which lead the nice counterparts to stop their cleaning, leave a note for Mom and head to the lab before further destruction is made.

The normal Dexter and Dee Dee go to the lab and are able to destroy their rude clones. The two then leave the lab as Dexter announces he is glad that there was no harm done. As they come around a corner, they see Mom standing before them menacingly with a bar of soap in her hand. She is not happy, but still angrily calls them over to her, obviously intending to wash their mouths out with it. As Dexter looks into the camera, he says, "Ohhhhhhhh, ****." before the iris wears out. 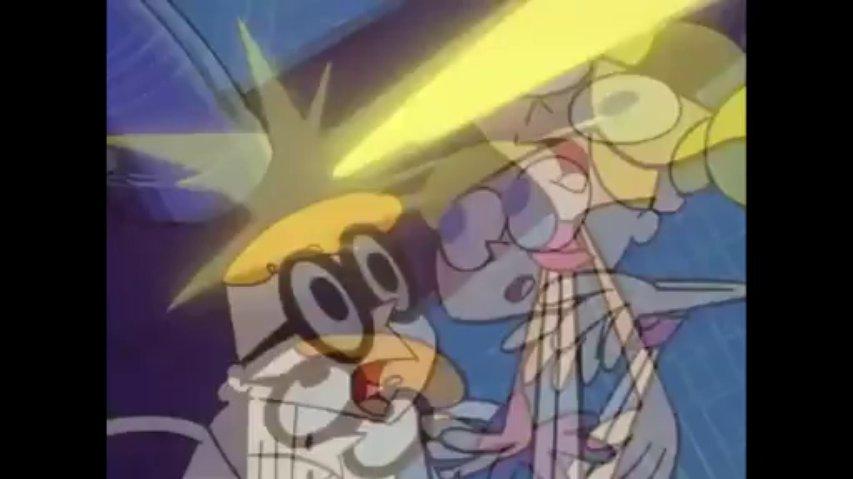