The Robo-Dexo 2000 (also known as the Giant Dexo-Robo) is Dexter's giant fighting robot and one of his most used and famous inventions. It is a giant robot designed to look like Dexter. It is used on both adventures and in battle, usually to save the world.

The Robo-Dexo 2000 resembles its creator in design. It has a white and black color scheme, blue visor-like "glasses" where the cockpit is located, a square white head made in the image of Dexter, white and black boot-like feet made to resemble Dexter's own boots and large purple hands that resemble Dexter's gloves. Its main weapons are its rocket-launching hands and its "PEZ" missiles stored in its neck. It can also fire various lasers from its eyes, hands and chest. Despite being a "giant robot", however, the Robo-Dexo is often dwarfed in size by its opponents, similar to Dexter's short stature. In seasons 3 and 4, the Robo-Dexo remained mostly unchanged, however its "glasses" were now black instead of blue and its "gloves" were a lighter shade of purple.

In seasons 1 and 2, the Robo-Dexo 2000 appears to be a mindless mech with no AI who only moves in accordance with its pilot. However in the episode "RoboDexo 3000", the Robo-Dexo is actually shown to posses a very simplistic AI (although it cannot speak) and can actually perform basic tasks without the need of a pilot. It is also shown be incredibly loyal to Dexter despite his abuse and his attempts to replace it, and was willing to serve its master even when it was about to be scrapped. In the end, Dexter promised to take better care of it and began to treat it as a trusted ally. 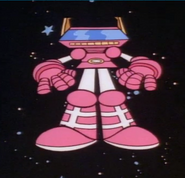 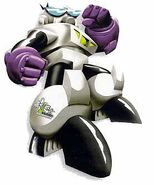 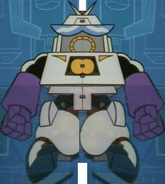 Composite picture of Robo-Dexo 2000 from "Let's Save The World, You Jerk"

Laser Beams firing at an incoming asteroid hurdling towards Earth

Dexo-Robo floating in space with asteroid destroyed in background

Giant Dexo-Robo, as it appears during its screen debut in "Big Sister
Add a photo to this gallery

Retrieved from "https://dexterslab.fandom.com/wiki/Robo-Dexo_2000?oldid=39999"
Community content is available under CC-BY-SA unless otherwise noted.