Number 12, D22, or Young Adult Dexter is Dexter in the future as a young adult. He is a complete slave to his boss and works in a cubicle as a low-rez worker. Mandark is needlessly abusive to him, harshly and severely punishing 12 for the slightest error- even something as minor as almost being late to work. These punishments are usually carried out by Mandark through flogging sessions broadcast through the entire building, brutally lashing 12 on the back with a laser whip. It can be inferred that such events are more than likely what led to such a drastic shift in character from Dexter to Number 12. In fact, such brutality (along with Mandark seemingly ruling the world) seems to have caused him to forget his name and how he acted as a child, stating, without hesitation, "Oh, I've always been like this."

Number 12 was the first of Dexter's future selves to be visited in Ego Trip, to which Dexter was brought to by a street drone after analyzing his DNA and ordering him to "return to [his] work station". Shortly after being deposited in his cubicle, Dexter bears witness to the sadistic flogging of his future self, and the two Dexters meet face-to-face. Number 12 initially doesn't recognize Dexter, however, and even after being informed that he is speaking to his past self, he denies it and attempts to ignore him and continue his work, for fear of further punishment. Dexter soon uncovers the Neurotomic Protocore and blueprints relating to it, safely stowed away in a compartment hidden in a wall of the cubicle, which Number 12 had most likely been working on (and hidden) before Mandark overthrew the company.

With much persuasion from his younger self, Number 12 remembers his true name and agrees to come along to see how "cool" they both become... but not before finding and putting on his trademark purple gloves. However, in their haste to leave, the Protocore is left out in the open, and soon discovered by Mandark. The two Dexters sneak back into Dexter's laboratory-turned-rec-room, and head to the future.

In the special's fourth act, in which Dexter, Number 12, and Old Man Dexter meet Action Dexter, it is revealed that  Dexter's meddling created the dystopic future Action Dexter has had to endure, as the Protocore's flow (having been snatched up and used incomptently by Mandark) was set to negative, numbing the minds of the populace and allowing Mandark to hoard all technology for himself. Number 12 realizes this, but is quickly hushed by Dexter jabbing an elbow into his arm.

Number 12 not only aids in the building of the robot used to storm Mandark's fortress, but also fights in the final battle to defeat his nemesis once and for all. After Executive Mandark slaps him around, takes his glasses, and smugly crushes them underfoot, 12 reaches his breaking point and finally lashes out against his oppressor, attacking him and stealing his glasses for himself.

His confidence finally restored, 12 realizes that switching the flow of the Neurotomic Protocore from negative back to positive will restore the world back to its original state and tells the other three Dexters, who break free of their own Mandarks and make an attempt to do so. In the grapple between the Dexters and Mandarks from each time period, Number 12 can be seen both holding the child Mandark back by his cape... and forcing his former boss back via a boot to the teeth.

Number 12, along with the other Dexters, returns to his time period after saying goodbye- albeit with a smile, and a touch more of self-confidence.

Number 12 looks very similar to Dexter, with the same curly red hair, pale skin, and glasses, though much taller, lankier, and somewhat scrawny-looking. His head is also somewhat of a different shape, that alike of his Dad. His lab coat having just four buttons on it. He is more often than not seen with a slouch, despite his height. Interestingly enough, he seems to be even paler than his child counterpart in some scenes of the special. It is unknown whether this is the result of a simple coloring error, or if perhaps being shut inside the corporation for so long has indeed deprived him of needed light.

Number 12 is shown to be much more mild-mannered and timid than Dexter or any of his other counterparts, more than likely due to Mandark's abuse over the years. When visiting the future of his much older self, he joined his younger counterpart in mocking Braindark, even laughing at him.

Due to the trauma , Twelve has little confidence in himself, and generally lacks the aloof attitude of child Dexter. However, by the ending of the special, he seems to be a bit more well-adjusted after standing up to Executive Mandark, arguably having even taken a big part in the fight against all the Mandarks, and it is likely that this confidence-boosting event would result in his rebirth as Action Dexter.

Also, just like his counterparts he appears to have issues with his sister as shown when he was shocked by her sudden appearance. 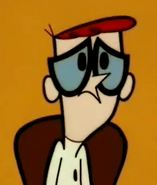 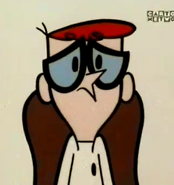 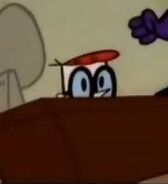 "Did someone say 'science'?" 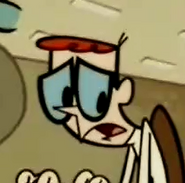 "I don't know who you are, but please leave!" 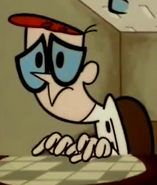 "Yes, I increased the cubicles' space by one foot!"

Dexter, hopeful, tries to remind Number 12 who he is.

"Dexter! Hahahaha!" Number 12 remembers who he truly is.

Grab your gloves; we're going to the future! 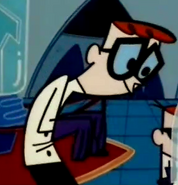 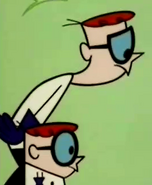 A height comparison between the two young Dexters.

Such elegance! Such grace!

Someone's excited to save the future.

The four Dexters before Computer.

Two wrenches are better than one!

Moments before his glasses are smashed.

A triumphant Number 12, after taking his boss' glasses. He's stronger than he looks.

Number 12 got his Revenge 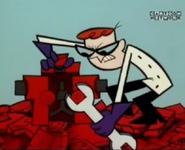