Mom is Dexter and Dee Dee's unnamed red-haired mother. She is an everyday house mom as well as a Germ-o-phobe. She always wears a pair of yellow rubber gloves and is mostly seen keeping things clean around the house. She is a very busy mom who is seen doing lots of other work around the house as well. She is voiced by Kath Soucie.

Dexter's Mom is a tall woman with a rather big bust, huge hips and a large behind which are often a source of adult humor in some episodes. She wears a pale green blouse-shirt with a wide collar, white apron, dark green pants and pumps. For swimwear, she wears a green bikini. As a baby, she wore a diaper, had a single red hair on her head and a pacifier in her mouth. Whenever she's around the house, she always wears the yellow rubber gloves she's known for.

Mom is a woman who is afraid of germs and has trouble being around the rest of the family without her rubber gloves. She is rarely seen without her gloves, and, should she happen to lose them, starts to go insane in an episode - "Pslightly Psycho" to be exact - when they have gone missing from her nightstand. She is also shown to have quite a ferocious temper that shows itself when she is disobeyed or angered in some way, going so far as to threaten Dexter with a spanking due to his unwillingness to throw out the garbage.

Though her first name is unknown, her maiden surname before marrying Dad was probably O'Reilly since that is the last name of her brother.

It is revealed in a flashback episode that she used to be a Valley Girl type in the 1980s, which may also be the basis for her accent. She also met her future husband in college; he ended up helping her cope with university life and her germ fear. It's also revealed he gave her her yellow gloves to help her. In Chess Mom, it is revealed that she used to be a cheerleader in high school. She is always seen walking on her tiptoes and her feet make a very dainty, clicking sound whenever she walks around which explains how Dee Dee inherited the squishy sound her feet make when she walks around. On that note, it is revealed in one episode that Dee Dee inherited snowball fighting skills from Mom. Her real name has never been revealed, and her husband only refers to her as "honey," "dear," etc. When she was a baby, she was a pacifier sucking addict and always whined.

Dexter's mother has also shown to be able to fight very well. She beat up another mom, rescued Dexter from aliens, and helped Dexter save the world from Badaxtra. 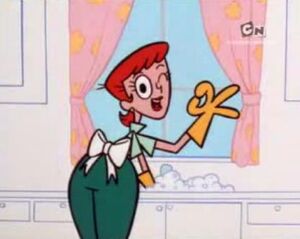 Mom's gallery can be viewed here