Miss Wimple was one of Dexter's teachers who made an appearance in Dexter Detention. In the episode, when she takes the place of Phillips Luzinsky, she was giving a test to her class but when Dexter accidentally revealed an answer to a fellow student Miss Wimple, with a heavy heart was forced to punish Dexter by sending him to detention. She seems to have very high admiration for Dexter that seems to go to the point of romantic interest. Before giving out the test, she blows Dexter a kiss, which leaves an A+ mark on his cheek, showing she is rooting for him. 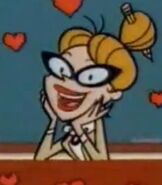