Miss Spell is a female superhero sorceress who fights using her magical spells. She is the only female member of The Justice Friends.

Miss Spell is an attractive light-skinned woman of average height who wears a pink dress with a red waist, along with red gloves, knee-high red boots, a red and pink witch's hat, a long cape-like pink veil which may actually be her hair, and a red mask which conceals her eyes, making them appear pink.

She seems to get along well with the Justice Friends and is always willing to aid them when they're in need even if said aid is for something silly. She may be good friends with Agent Honeydew, as Honeydew keeps a picture of Miss Spell in her living room. She also seems to like chicken and gets along well with Phan Tone as both even participated in a potato sack race together.

She appears to be some sort of sorceress capable of using magical spells to give her a number of abilities, such as flight, surviving in space and creating bolts of pink energy. 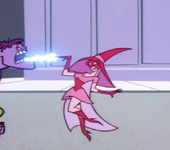