Mental Mouse is an evil mutated mouse who appears in the episode "Can't Nap". He steals Valhallen's mighty axe and uses it to amplify his own powers in order to corner the world cheese market, but is defeated when White Tiger appears and aids Valhallen in retrieving the axe and restoring his powers. He was voiced by Tom Kenny.

He is a large-headed rodent with a giant brain, hence his name, that's sprouting out of his head. Mental Mouse wears a set of armor almost identical to M.O.D.O.K.'s, an orange suit with a jet at the bottom that allows him to hover.

He is an evil genius, but like any cartoon mouse, he has a strong love of cheese and hopes to corner the world cheese market.

Mental Mouse possesses high intelligence as well as strong psionic and telepathic abilities. He can harness the power of mighty objects to amplify his own abilities. 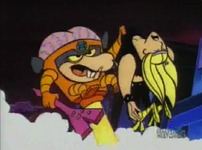 Add a photo to this gallery

Retrieved from "https://dexterslab.fandom.com/wiki/Mental_Mouse?oldid=38622"
Community content is available under CC-BY-SA unless otherwise noted.