Lee Lee is one of Dee Dee's two best friends alongside Mee Mee. She likes the same things as Dee Dee and Mee Mee and often causes havoc in Dexter's lab with them or plays with the Pony Puff Princesses they love so much! Lee Lee is voiced by Kath Soucie.

Lee Lee is shown to be nearly identical to Dee Dee and Mee Mee in terms of body shape (long legs, long arms, large heads and small bodies) and even wears the same kind of clothing as them. (small pink leotard, white ballet tights and pink ballet flats) However, Lee Lee is Asian while Dee Dee is Caucasian and Mee Mee is African-American, and while Dee Dee and Mee Mee wear pigtails, Lee Lee wears her hair down. In her first appearance, Lee Lee has short black hair with straight bangs. Later on however, she was given a new hairstyle. Like Mee Mee, Lee Lee has dark-colored eyes which appear black.

Usually Lee Lee is seen in the same pink tutus and pumps as Dee Dee and Mee Mee, but in the episode "That Crazy Robot", the comics and Ricky and Friends, Lee Lee has a more unique outfit color, instead wearing a green version of her outfit instead of pink. In "Tribe Called Girl", Lee Lee's green pajamas are shown, which are a long-sleeved midriff-baring top with a mint-green tank top over it, green sweatpants, and white bunny slippers.

Lee Lee shares the same interests as Dee Dee and Mee Mee, having a love for ballet, Pony Puffs, tormenting Dexter, dolls and anything they deem cute. Lee Lee, like Mee Mee, seems somewhat smarter than Dee Dee, as shown in the episode "Techno Turtle" and "Dee Dee's Tail", however despite being slightly smarter than Dee Dee, Lee Lee and Mee Mee are still ridiculously dumb and in the episode "G.I.R.L. Squad", both Lee Lee and Dee Dee are shown to be slightly smarter than Mee Mee, indicating that all three girls are likely equally dumb but will occasionally have a bit more common sense than one another depending on the situation. Lee Lee seems to have feelings for Dexter, as shown in more than one episode and in the comics when she openly calls him cute, leading to the two other girls teasing her. Lee Lee's feelings are more discovered in the comics, especially in the IDW comics series, where she was willing to betray Dee Dee and Mee Mee to help Dexter's escape from the warped reality.

In her first appearance, Lee Lee was attending Dee Dee's club meeting with Mee Mee where she reminded them that they needed to practice their new dance routine. After finishing their intricate dance, they decided to go "play" with Dexter, much to his annoyance, as their play time involved messing up his lab. Things only got worse when they stumble upon Dexter's Clone O Matic.

Lee Lee attended Dee Dee's slumber party alongside Mee Mee, however unbeknownst to them, they were secretly being studied by Dexter, who wished to find out more about female behavior and rituals. Upon discovering him, Dexter becomes highly cautious to the point of acting like a scared animal, a trait which immediately attracts Lee Lee to Dexter. As the night goes on, Dexter is unable to make sense of the ways of females and in a state of panic eventually flees. Dee Dee and Mee Mee comment about his weird attitude, however Lee Lee instead finds his behavior to be "cute", a statement which instantly earns her teasing from her two friends, much to her frustration and annoyance.

Lee Lee is seen contently playing jump rope with Mee Mee and Dee Dee when suddenly a very rugged Dexter passes by. Lee Lee and Mee Mee both instantly become attracted to the new rugged Dexter much to Dee Dee's shock, who herself can't deny that Dexter has become rugged as well.

Lee Lee along with her friends was present at the day of the big dance recital where she witnessed the impressive dance-off between Dee Dee and her newest rival Lalavava. Lee Lee and the rest of the girls were highly impressed with both their skills and had no objections when the two rivals (and an unnamed nerdy girl) where chosen to take part in the play.

After having had enough of Dee Dee's tomfoolery, Dexter invents the Dreamwish-O-Tron 5000, a device that can make one's fondest dreams come true, which he plans to use to finally be rid of Dee Dee. Once Dexter dreams of a world without Dee Dee, his wish becomes a reality, but as time passes he realizes that he misses his dear sister and decides to get her back. As he had planned for this, the device was not programmed to completely erase her, but instead send her to a different reality that suited her needs and where her mind would be altered to make her believe she had always been a resident of that reality.

Upon tracking down her location and traveling there, Dexter finds himself transported to a girly fantasy world filled with all the things Dee Dee would love. As it turns out, Dee Dee has been made the queen of this world, and Lee Lee and Mee Mee have been transported here as well, serving Dee Dee as her personal guards and advisers, likely having been wished away as well due to their strong similarities to Dee Dee, a fate which also befell many other girls who shared anything in common with Dee Dee. Once Dexter confronts them, Dee Dee, Mee Mee and Lee Lee have no recollection of who Dexter is, however Lee Lee can't help but find the "mysterious boy" cute. As Dexter tries to make Dee Dee remember, she has Lee Lee and Mee Mee throw Dexter into the dungeon for disturbing the peace. 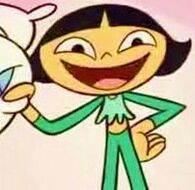 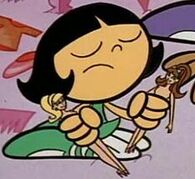 Season 2 version 2 and Ricky and Friends 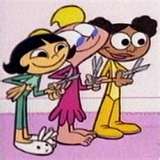 Dexter, you need a new hairdo!