“Please Ma'am, call me... Lalavava!”
—Lalavava
Lalavava (real name: Olga Astronomonov) is an evil and bratty little girl who was Dee Dee's rival, Mandark's little sister and second born Lovechild of Oceanbird and Windbear. She only appeared in the episode Dee Dee's Rival. Like her brother, she is voiced by Eddie Deezen.

Lalavava is a short little girl who has black hair that looks exactly like her brother Mandark's only she has in ponytails in it. She wears a pink dress and white knee socks and pink slippers just like Dee-Dee.

Lalavava is not like other little girls. She is not happy and childish like they are and she does not enjoy doing happy things. She is a dark and scary girl who acts very rude and evil. She takes a liking dark and depressing scary things and making the lives of other people miserable by doing things such as abusing her brother Mandark and treating him like a slave. She seems to be much stronger than him despite the fact that she is an eight year old girl and he is thirteen year old boy. Lalavava seems to go out of her way be rude to everyone in her life and make them miserable and unhappy for no given reason. However, despite all of this, she seemed to have taken a liking to ballet and impressing the other students at the dance school which would seem unlike her behavior but she probably did just because she knew that Dee Dee was happy with being the best dancer at the school and she wanted to ruin that for her.

Lalavava made her debut, and only appearance, in the episode "Dee Dee's Rival" as a major antagonist to Dee Dee, much in the same way as Mandark is to Dexter. In fact, she is designed in a way to parallel this role. While Dexter is short and blocky with a tall, lanky sister, Mandark is tall and lanky with a short, blocky sister about the same height as Dexter. However, unlike Dee Dee, she is not quite so ditzy in fact more horrifying and evil and very smart at that. She is also very strong and Mandark fears her.

After competing with Dee Dee as the ultimate ballerina of their ballet school, most notably in their stage performance where both of them used giant robots created by their brothers, Lalavava eventually became friends with her. They called it a truce after a fellow ballerina who was unintentionally tormented by the girls' robots' trips on the stage, garnered the audience's admiration. Dee Dee and Lalavava instead went to the mall while both agreeing that science is lame. After the episode "Dee Dee's Rival," Lalavava was never seen or mentioned again.

Dee Dee - Dee Dee was Lalavava's worst enemy. The two of them would always getting into fights and battling each other the same way their brothers Dexter and Mandark do. Dee Dee usually wins because she is good while Lalavava is evil, but just like Dexter and Mandark, they are very evenly matched and sometimes neither of them win and it ends up in a tie. At the end of the episode Dee Dee's Rival, the two of them became friends after agreeing that "science stinks". 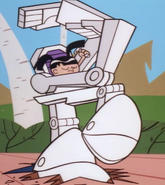