Koosalagoopagoop, also nicknamed Koosy or Koos for short, is Dee Dee's imaginary friend who is a rainbow dragon-like creature from an imaginary world called Koosland. Dee Dee is always going into her room to go and visit him in his imaginary world, which she enters via a portal of pink hearts and magic that Koosy can open up or access from the heart-shaped marking on his stomach. He was voiced by Dom DeLuise.

Koosy's appearance resembles a large, rotund, light-yellow dragon with a big light-pink heart on his belly. He has a big, long, colorful nose with rainbow stripes going along them that is in between his eyes, with glasses on top of them. He has a green hat on his head with tiny angel-like wings. On his back he has two big pink wings and a long tail with pink feathers on the tip. His tongue and spikes are purple.

In seasons 3 and 4, due to this batch of episodes being electronically colored, Koosy had brighter colors. His nose was longer and the rainbow stripes on it were now thin fine lines as well as they were on his tail. His wings changed to the color white and the wings on his hat matched the color of his skin. His tongue was now pink and normal colored.

Koosy is a nice and loving friend in the land of Koos, who loves to have fun and play around. He loves to humor and play with everyone, and does just that in the land of Koos. However, he doesn't know when to stop with the fun, which makes him very annoying to people such as Dexter and Peepers. There are also problems and conflicts that happen involving Koosy and/or the Koosland. This happens in almost every episode that he appears in. In the episode Koos a la Goop a Goop, there is trouble when Koosy lies to Dee-Dee about being the King of Koosland and in Jeepers Creepers where is Peepers, when Hokochoo wrecks havoc on Planet Koos. Even though there are problems and negativity here and there, Koosy is always looking on the bright side of even the darkest situations and almost never feels any negative feelings. 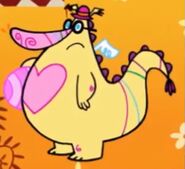 Koosy’s newer appearance in seasons 3 and 4.

Koosy in The Powerpuff Girls
Add a photo to this gallery

Retrieved from "https://dexterslab.fandom.com/wiki/Koosalagoopagoop_(character)?oldid=39276"
Community content is available under CC-BY-SA unless otherwise noted.