The Hydro Cosmetic-Accelerator is an aging machine that was invented by Dexter. It was used in several episodes. It is capable of accelerating or decelerating someone's age to any other desired age.

In the episode "Old Man Dexter," Dexter used his Hydro-Cosmetic Accelerator hoping to age himself to 21 years old in order to watch late night television, but Dee Dee interfered and he ended up as an old man.

In the episode "Babysitter Blues," Dexter used his Hydro-Cosmetic Accelerator to age himself 10 years so that his older babysitter Lisa would date him. Unfortunately Lisa was repulsed by his stereotypically nerdy appearance and ran away from him. Then much to Dexter's horror, Dee Dee became smitten with Dexter and while he tried to run away he was punched out by Lisa's boyfriend Jeff for trying to steal his girl.

One of its hourglasses was seen being shattered by a monstrous Dee Dee's powerful cries.

Don't Be A Baby

In the episode "Don't Be a Baby," Dexter and his sister planned on aging themselves so they could attend a movie they apparently wanted to see, but accidentally de-aged everyone in the city into younger versions of themselves. Luckily after the machine was fully recharged and they were able to put their infant parents to sleep, they were able to restore everyone back to their right ages.

In the episode "Dexter vs. Santa's Claws", the Accelerator makes a small cameo in one of Dexter's many monitors. 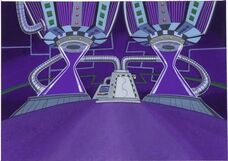 A background still of the Hydro Cosmetic-Accelerator 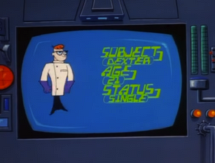 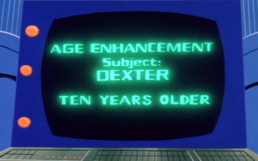 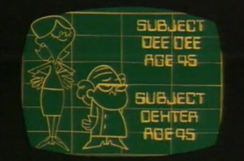 The Hydro-Cosmetic Accelerator's Monitor set to 45 years (Don't Be A Baby)
Retrieved from "https://dexterslab.fandom.com/wiki/Hydro-Cosmetic_Accelerator?oldid=24203"
Community content is available under CC-BY-SA unless otherwise noted.