“Excellent. Gentlemen, we are about to make a lot of bread.”
—Fois Gras


Fois Gras is a fiendish baker-themed supervillain and a nemesis of Action Hank, being one of the few foes with a beard as rugged as Hank's. He is aided by his team of Flour Smugglers who also possess beards as rugged as his.

He is a very pale skinned man of average height and portly weight with white chef's clothes and white facial hair, giving him a very prominently white color scheme and appearance. He also wears white shoes with high heels. Like Action Hank, he has a very rugged beard and mustache, but instead, Fois Gras' is incredibly sharp and pointy.

Fois Gras is a villainous baker whose goal is to corner the bread market and roll in the dough. He speaks with a prominent French accent, implying he may be from there. He is not above using violence to achieve his goals and will cut down anything that stands in his way. He seems to be a good leader well admired and trusted by his men.

Fois Gras is a dangerous criminal who primarily uses his beard or guns in combat. He seems to be a skilled swordsman, capable of using his beard like a rapier. He is also a skilled baker who specializes in the production of black market bread.

The Flour Smugglers are confronted by a bearded Dexter and Action Hank, who ultimately defeat the smugglers and break up their smuggling ring. 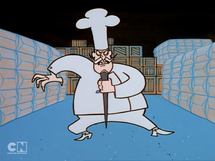 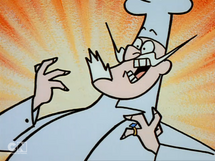 Retrieved from "https://dexterslab.fandom.com/wiki/Fois_Gras?oldid=37642"
Community content is available under CC-BY-SA unless otherwise noted.