Fishy was Dee Dee and Dexter's pet goldfish, and a minor but recurring character in Dexter's Laboratory.

Fishy is small, round goldfish with bright yellow (sometimes dark orange) lips, and a yellow dorsal fin. After dying, Fishy's soul resembles his physical form while alive, but had crossed-out eyes and gained an eerie otherworldly glow. In his first appearance, Fishy had a more simplistic and "pointier" design with no lips.

Fishy was first seen Dee Dee took control of the Mom-Droid which began wrecking the house and almost broke Fishy's bowl. Instead, Fishy's bowl safely landed on a pillow but was about to be eaten by the Cat, luckily Mom-Droid grabbed the cat and swung it away, thus sparing Fishy.

Fishy was accidentally killed by Dee Dee and Dexter after they forced him to do too many tricks, which made him suffer overexertion. After they failed to give him a proper send-off to The Sewer Beyond, he came back from the dead to have his revenge. 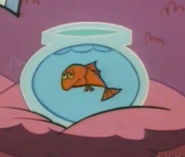