Douglas E. Mordecai III is one of Dexter's best friends. He attends school with him and is similarly geeky. He is voiced by Tom Kenny.

Douglas is a friendly boy with geeky tendencies who shares much in common with Dexter, and while they are both very intelligent, he does not seem to be as smart as Dexter. It's unknown if he knows about Dexter's laboratory since he was never seen in it, but it is a possibility since he knows Dexter's work. E.G.: An Interdimensional Portal to the Multiverse from the episode "Framed". Also, in the episode "Dexter's Rival", Mandark claims to have learned about Dexter's lab from a third party, and although Douglas is not mentioned in the episode, he is most likely the only person in school Dexter would trust with that knowledge, indicating that the two have a very close friendship.

Douglas and Dexter are seen on the bus showing off their items that they prepared for their big test. When Dexter shows off his #2 pencil, it is taken by Gwen & Becky who end up losing it in the back of the bus, much to everyone's horror. Before heading into the back to get his pencil back, everyone tells Dexter the many legends of Billy Bloomberg, including Douglas, who explains that Billy had been sucked into an Interdimensional Portal to the Multiverse that opened up in the back of the bus. Regardless, Dexter went into the back of the bus and discovered that Billy had simply gotten stuck on some gum many years ago and proceeded to save him, much to everyone's amazement.

He and Dexter are seen listening to a science recording, naturally giggling at "Chapter 8: Reproduction". After Dexter becomes popular, he ends up abandoning Douglas, but after Dexter learns the error of his ways, Douglas gladly welcomes him back.

Mordecai's design in seasons 1 and 2. 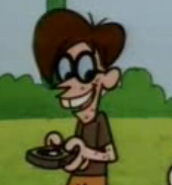