Dexter's Walking Robot is a remote-controlled robot toy action figure released in 2000 by Trendmasters and designed by Genndy Tartakovsky.

It is a blue colored plastic robot with red claws, bulky limbs, a removal glass dome which covers a cockpit, and two antennas on its back. Its remote control is connected to its back via a black cable. It also has a few lights on its front that light up.

The toy comes with a small, static Dexter figure (which can be placed in the cockpit), two missiles (one for the bot's right arm, one for its chest), and a ray gun and beaker for Dexter. 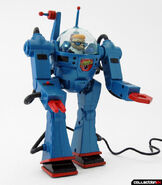 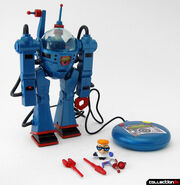 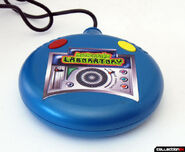 Add a photo to this gallery
Retrieved from "https://dexterslab.fandom.com/wiki/Dexter%27s_Walking_Robot?oldid=18792"
Community content is available under CC-BY-SA unless otherwise noted.