Dexter's Lab: A Story is the first part of an episode of the second season of Dexter's Laboratory, which first aired on January 28, 1998. In this episode, Dexter meets a Labrador Retriever who follows him all the way to his house. Dexter has a hard time understanding the dog, so he gives it the ability to speak human language. However, the dog's yapping soon drives Dexter crazy, prompting him to find the dog's owner.

While walking home from school, Dexter comes across a dog, who barks at him. Dexter is startled and pets the dog, who is wanting to play. After petting the dog, Dexter goes back to walking. He notices that the dog is following him and tries to lose him, eventually running home and into the lab. After closing the door to the lab, Dexter turns around and finds the dog sitting beside him. As Dexter is yelling at the dog for getting into the lab, he notices Dee Dee running around. Dexter then starts yelling at Dee Dee for being in the lab, and the dog starts barking along with him. Dexter sends the dog after Dee Dee, who brings her back wanting to play fetch. Dexter throws Dee Dee like a stick and the dog brings her back. As Dexter is praising the dog, Dee Dee angrily leaves the lab. Dexter leaves the lab to find a treat, but leaves the door to the lab open. Dad walks into Dexter's room, looking for Dexter and notices the dog. As Dexter is getting the treats, he hears Dad upstairs angrily asking about a lab. Dexter believes he is talking about his laboratory and rushes to his room, only to find that he was talking about the dog, a Labrador Retriever. Dad asks Dexter if he is going to keep him, and Dexter responds, saying that he isn't sure he's ready for that kind of responsibility. Dad ignores him, telling Dexter how lucky he is as he leaves the room. The dog becomes increasingly annoying for Dexter. He first brings Dexter numerous random items, then he is licking Dexter, finally he takes a bone from a dinosaur skeleton Dexter had assembled. While Dexter is sitting at his computer, the dog runs to him, barking. Thinking there is an emergency, Dexter follows the dog to the capacitor, but finds nothing wrong. Dexter complains about the dogs inability to understand English, and creates a pill that allows him to do just that. The dog takes him back to the capicator, but is afraid of it for no reason. At the dinner table, the dog starts smelling everyone, much to their displeasure. He then begins begging for food, which leads Dad to tell Dexter to feed him. Dexter says that he already fed him, and Dad reminds him of the talk they had about responsibility. Dexter points out that he was talking about responsibility, and Dad tells him to take the dog upstairs and feed him. As Dexter is trying to sleep the dog is yelling at other dogs barking, and later howling at the moon. At sunrise, the dog wakes up Dexter, wanting to play. Dexter has finally had enough of the dog, and decides to put up posters looking for the dog's real owner. Almost immediately after returning home from putting up the posters, the owner calls and comes over to get the dog. The owner is as annoying and repetetive as the dog and they both rush out of the house after agreeing to go for a ride.

Dee Dee: I don't have to stick around for this.

Talking Dog: It's here! The thing! I found the thing and here it is! Here's the thing! Right here! A thing!

Talking Dog: It's the stick!

Mom: Now, now, no chickey and ricey for the puppy.

Talking Dog's Owner: Hey it's my dog, I found my dog!

Talking Dog: Hey it's my man, I found my man! 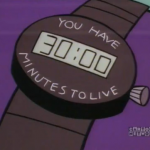