Dexter's Laboratory Wiki
Register
Don't have an account?
Sign In
Advertisement
in: Dexter's Inventions, Robots, Recurring Objects, Seasons 1 and 2 only

Dexter created the Dexo-Transformer in order to defeat his bullies at dodgeball in the episode Dexter Dodgeball.

Gooey Aliens That Control Your Mind

After Gooey Aliens took over the minds of Dexter's family, he desperately looked for an invention that could help him take them out without permanently harming them. To his luck he found the Dexo-Transformer, recalling that he had not used it since the dodgeball incident. After putting it on, he immediately took on his possessed family and painfully subdued them (without permanently harming them) and destroyed the aliens within them.

Dexter loaned the Dexo-Transformer to Dee Dee for her to use in her dance show to look better than Lalavava. Unbeknownst to her, Lalavava had her brother Mandark build her his own version of the Dexo-Transformer, the Mandark-Transformer. When the dance finally began, the two danced against each other in a destructive robot battle, each one performing destructive and weaponized dance moves that destroyed the whole theater. With the theater destroyed, the two realized that science stinks and both decided to go to the mall together in their transformer suits.

Last But Not Beast

He used the Dexo-Transformer in the episode "Last But Not Beast" to show off to a couple of Japanese boys he met during his student exchange program in Japan. During this episode, he referred to it as the "Exo-Jock 9000".

The suit was used by Dexter to defeat a group of robots that had come from the future. The suit is later shown to have had a foam model made in its honor in Dexter's museum in the far off future of Dextopia.

Dribbling one of the bullies

Dexo-Transformer from "Last But Not Beast" 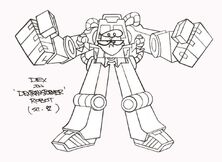 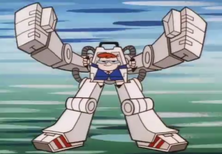 Exo Jock 9000 aka Dexo-Transformer from "Last But Not Beast" 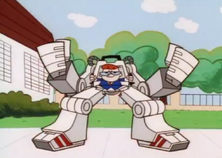 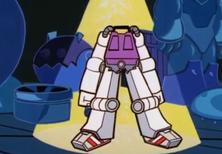 Vacant Dexo-Transformer in "Gooey Aliens That Control Your Mind" 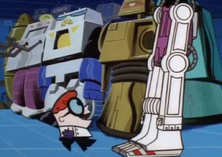