The Detention Warden is a teacher at State Prison in charge of overseeing detention and disciplining "criminal" students. His only appearance was in the episode "Dexter Detention".

The Detention Warden is very mean, dirty, grumpy, unhappy, ignorant, unfriendly, unpleasant, disgusting, sour, angry, obnoxious, abusive, despicable, rude, and loud-mouthed. He punishes all of students for that in the detention, worst of all, he doesn't consider anyone innocent.

The Detention Warden was a tall, middle-aged, rotund man whose appearance was similar to a ballpoint pen. He wore a white short-sleeved dress shirt, a brown-and-beige striped tie, long tan slacks, and brown leather shoes.

The Detention Warden is very similar to the Warden from the 1979 film, Escape from Alcatraz, who is portrayed by the late Patrick McGoohan. 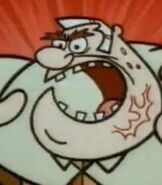