Darbie is a popular franchise of dolls beloved by little girls and adult fans since 1959. Its titular doll is the eponymous Darbie, a very fashionable young woman with plenty of accessories. Dee Dee owns at least one, and it has taken on different appearances depending on the episode.

The Darbie doll first appeared in the episode "Dollhouse Drama", as a central part of the plot, where after Dexter shrank himself to the size of a doll using his Shrink Ray, he began to hallucinate and as his imagination ran wild he began a romantic and imaginary relationship with Darbie.

Darbie is a plastic doll girl with blonde hair that she wears in a ponytail and a pink dress.

The Darbie fanbase is a large and devoted lot, so much so that they practically worship the doll at conventions. Their devotion to the doll is so great that the highly valued First Darbie Doll is protected by a high priestess and her personal guards. Darbie Collectors put great importance on the collector's value of the dolls and opening a mint condition NRFB Darbie (Never Removed From Box), such as an unopened Bicentenial Kristal, is seen as a great crime punishable in trial by combat with the perpetrator being forced to fight the vendor of an NRFB valuable.

Darbie, as she appears in Dexter's imagination 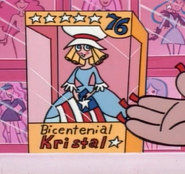