Dad is Dexter and Dee Dee's unnamed blond-haired father. He is voiced by Jeff Bennett.

Dad is tall, hairy, and somewhat muscular, with a bit of a gut. He wears glasses and has blonde hair. He is usually seen in a white polo shirt, a striped tie, and brown dress pants. As a baby, he still has blond hair and wears glasses, but wears a striped shirt, wears a diaper and is a troublemaker.

When "Dexter's Laboratory" production was converted from Hanna-Barbera to Cartoon Network Studios, Dexter's Dad's appearance changed the most drastically out of any other character. In Season 3 and 4, Mr. Dad's head is big on the top, but shrinks into a small body, rendering his head in the shape of an isosceles triangle, depending on the direction he's facing. It is possible that he lost weight.

Dad loves bowling, golf, fishing, and has an unnatural affinity for his wife's muffins, of which she can expertly create (according to him, the muffins are the reason he married Mom, though this may have been a spur-of-the-moment remark, since he desperately wanted the muffins at the time). Dee Dee's traits inherited from Dad include his cluelessness, naivete, high agility in sports, and blonde hair, though Dexter has inherited his need for glasses and obsession over petty things from him as well. In order to impress Dexter's classmates during "Bring Your Dad to School" day, he pretended that his career was that of an Evel Knievel-esque motorcycle stuntman, mentioning in passing that they wouldn't be too impressed if they found out he was a "boring old scientist." Like his wife, his real name has not been revealed and he is referred to as "dear," "honey," etc. As a baby, he was always a spoiled and rotten child, causing mischief and troublesome. Dee Dee definitely inherited his clueless curiosity- in The Muffin King, Dad runs around the kitchen pushing buttons and creating a mess while mom tries to make her muffins spurring her to yell at him very much like Dexter does to Dee Dee. Also in Sports A Poppin' Dexter mistakes Dad for Dee Dee as Dad yelled 'HI DEXTER' out of the blue exactly like Dee Dee does.

As shown in several episodes, such as "Better off Wet," Dexter's dad can be a bully, embarrassing and pulling childish pranks on his family for his own enjoyment. These often include pushing his family in the pool, and very manipulative behavior. He shows little attention towards the words that exit Dexter's mouth, such as in "Dexter's Lab: A Story," where he completely disregards Dexter's statement of taking care of a dog being too much responsibility by assuming that Dexter wants the dog, all the while completely ignoring Dexter's open lab located directly behind him.

According to the episode "The Muffin King", Dad's workplace may also be in an office as when Dee Dee takes pictures of him dressed as Mom, she says; "Wait til' the boys at the office see these."

The only thing close to being named was in the episode "Bad Cable Manners" where everyone refers to him as "Mr. Dexter's Dad."

Once, Dad tried to get Dexter into sports, as shown in the episode "Sports a Poppin", but by the end of the episode, it didn't work. He was once seen smoking a pipe in one episode. While his intelligence is far below that of Dexter's he sometimes gives good advice such as advising Dexter to get his glasses fixed after they were regarded as "cool." Dexter's father normally tends to show favoritism to Dee Dee for her athletic prowess, but will occasionally side with Dexter when facing a challenge between the sexes (such as the snowball war between Dee Dee and Dexter, which he treats as a life-and-death matter in which Dexter must avenge his father being hit with a snowball thrown by Dexter's mother back in college). Dad is also depicted as unreasonably hostile towards everybody when they interfere with a sports-related activity such as watching the "biggest golf match of the year" or breaking his bowling trophy. 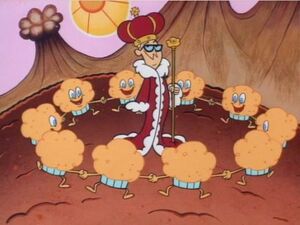 Dad's gallery can be viewed here