Chubby Cheese is the mascot of the Chubby Cheese's restaurant/arcade chain. He was voiced by Rob Paulsen.

Chubby is an obese yellow animatronic mouse with pink eyes and a big red nose. He wears a green vest, with no shirt underneath, and brown shorts. In Dexter's imagination, he appears as a real and plump mouse seemingly oozing cheese from his body.

Despite his whimsical nature, the character of Chubby along with his restaurant chain, were conceived by the Captain of an evil organization in the hopes of luring child geniuses to their restaurants and abducting them to serve in the organization's plans for world domination.

In the restaurant, an animatronic Chubby sings with his band, which is comprised of animatrons of classic Hanna-Barbera characters such as Boo-Boo Bear, Squidlly Diddly, The Hair Bear Bunch and Grape Ape.

In this episode, Chubby Cheese is mentioned when Dad (disguised as Mom) tries tricking Dexter and Dee Dee into giving him the muffins by telling them that he would take them to Chubby Cheese's. 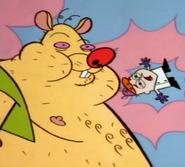 Chubby Cheese in Dexter's imagination
Add a photo to this gallery

Retrieved from "https://dexterslab.fandom.com/wiki/Chubby_Cheese_(character)?oldid=38063"
Community content is available under CC-BY-SA unless otherwise noted.