Braindark is one of Mandark's Future Selves from "Ego Trip". He is Mandark's elderly and disembodied brain from the far future who lost his body in battle against Action Dexter long ago.

Braindark lives in the far future of Dextopia where Old Man Dexter permanently imprisoned him in a brain jar for his crimes against the world and is forced to reside in the Dexter Museum. His jar is completely immobile so there is not much he can do other than talk and yell out insults like a grumpy old man. When the time traveling Dexters prepared to battle Overlord Mandark, he summoned his own past selves to help him, including Mandark, Executive Mandark and Braindark. During the fight, Braindark and Old Man Dexter simply exchanged senile insults. However Braindark's insults appeared to be weakening Old Man Dexter's resolve, but eventually Old Man Dexter was able to gain the upper hand and escape the barrage of insults. When the Dexters prepared to deactivate the Neurotomic Protocore, each of them were grabbed by their respective Mandark, but before they could deactivate it, Dee Dee appeared from Dexter's Time Machine and all the Mandarks immediately fell in love after seeing their beloved Dee Dee after so long. Dee Dee then unknowingly de-activated the Protocore and set its energy output to positive, which undid all of Overlord Mandark's evil and caused his body to explode, leaving behind only his brain and thus turning him into Braindark. Mandark, Executive Mandark and Future Braindark were then sent back to their own time periods. 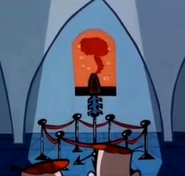