The Bird Suit is one of Dexter's many inventions. It was used only in the episodes "Inflata Dee Dee" and was not specifically named in the episode. The bird suit was used by Dexter to capture Dee Dee, who was using Dexter's Hydroplasmatic Inflation Suit to annoy him. Dexter accidentally popped the inflation suit and subsequently destroyed the bird suit while trying to save a free falling Dee Dee.

The Bird Suit has a similar appearance to the Bird Ship and is launched out of the back of the ship in an egg. 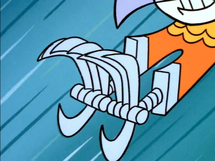 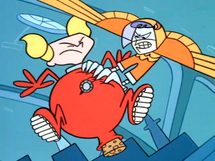 Retrieved from "https://dexterslab.fandom.com/wiki/Bird_Suit?oldid=23891"
Community content is available under CC-BY-SA unless otherwise noted.