Big Red is the champion fighter of the ant colony that inhabits Dexter's ant farm. He appeared in the episode "Ant Pants".

Big Red is a giant red ant that dwarfs all other ants that inhabit Dexter's ant farm.

When Dexter was arrested by the Ant Cop for laziness and not being a productive slave drone, the Queen Ant sentences Dexter to battle Big Red to the death, but Dexter is ultimately saved by Dee Dee. 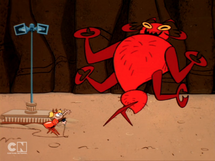 Retrieved from "https://dexterslab.fandom.com/wiki/Big_Red?oldid=35851"
Community content is available under CC-BY-SA unless otherwise noted.