Agent Honeydew is Monkey's sidekick and friend, who can ask Monkey for help with her telepathic abilities. She is voiced by Kath Soucie.

She has short black hair with curly bangs and wears a violet-blue S.H.I.E.L.D.-style jumpsuit. She occasionally wears a black dress with a pearl necklace.

Agent Honeydew is a spunky but fearless agent of British descent with a no-nonsense attitude while on duty. Despite their different species' (and the questionable ethics of this), it appears that Monkey and Honeydew's relationship is very close and romantic, as both are often seen going out on dates when off duty, sharing romantic dinners and Monkey staying over at her house where they apparently bathe together while she grooms him... Monkey is also very protective of her, willing to even sacrifice his own life on occasions to ensure her safety, and Honeydew is also shown to go to all the lengths to help Monkey out whenever in need. However, Monkey and Agent Hondeydew's relationship appears to have briefly ended around seasons 3 and 4 because of the events in the episode "A Quackor Cartoon", Monkey and Quackor started dating and in the later episode "Used Ink", one of the things that he asked for was a girl monkey implying that his relationship with Quackor had ended by then. However, in one of the final episodes of the series "Dexter's Wacky Races", Monkey is shown to be back together with Agent Honeydew.

As part of her agent training, she is a trained fighter who is proficient in firearms. She also has demonstrated what seems like telepathic abilities to contact Monkey when he is needed. In an ocassion, it was shown she can also fly. It is unknown if these are inborn or if she gained them later in life through unknown means.

At some point in her past, Agent Honeydew joined Global Security under the command of her boss, the Commander and later began working with Monkey, with whom she developed an unbreakable psychic bond and a strong friendship. She also began working with The Justice Friends and apparently became friends with Miss Spell. As they continued to work together, Honeydew and Monkey grew even closer, apparently. 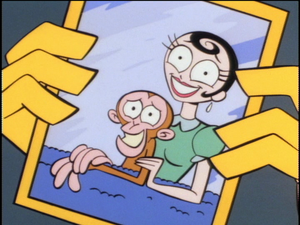