Action Hank is a heroic crime fighter and a television action hero. He is essentially a parody of several popular action shows/movies or action stars from the 70's and 80's, all rolled up into one. These include: Chuck Norris, Mr. T, G.I. Joe, Shaft and Rambo. Along with Major Glory and Albert Einstein, he is idolized by Dexter.

Action Hank is a muscular black man with an impenetrable black beard, which he uses to deflect various projectiles. He wears tiger print pants, a red belt with a belt buckle in the shape of an "H", a sweaty gray tank-top, and black boots. He also has a tattoo of a black panther head on his left arm.

He is a tough as nails former soldier with a no-nonsense attitude who will do whatever it takes to get the job done. He is very heroic and puts the safety of others and the world above his own. He loves danger and combat, and especially likes it when he is outnumbered and is given a real challenge. He is also a suave ladies man who can charm the ladies thanks to his amazingly rugged beard. Despite his status and intimidating disposition, he is actually a very friendly individual who loves his fans and is willing to help them out; he even runs his own personal fan club, showing that he enjoys meeting and working alongside his fans.

Action Hank is a remarkable hand-to-hand combatant trained to peak physical condition. He is skilled in marksmanship as well and has a vast knowledge of military protocols. His agility and reflexes are almost superhuman and his beard can be considered a superpower of its own. Aside from his abilities, Action Hank is one of the most rugged men in the world due to his manly and awesome beard. 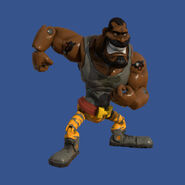 Action Hank, as he appears in the speedrun platformer "Action Henk".